Yasir Shah is the Pakistani Cricket & who is the 2nd fastest test cricket leg spinner bowler in the Test Cricket History by getting 100 wickets. His Test cricket debut against the Australia in 22 Oct 2014... 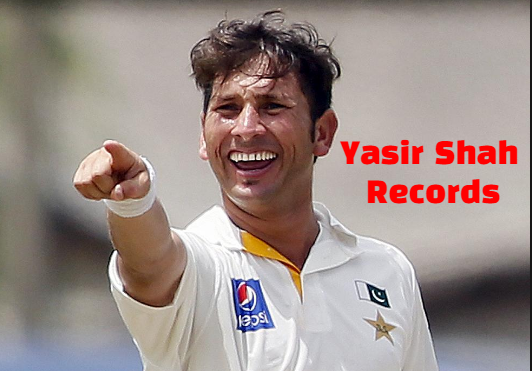 The fastest spinner to get 150 Test wickets in the lowest matches...

Yasir Shah became the fastest spinner to get 150 Test wickets in the lest matches..
Yasir Shahi took this milestone in his 27th match against Sri Lanka in Abu Dhabi. Earlier, the Australian league spinner Clarrie Grimmett did this work in 28 matches..
Pakistan's Saeed Ajmal, Hugh Tayfield of South Africa and Ravichandran Ashwin of India, got the same wickets by playing 29 matches.
Yasir Shah has also equalise the record of Waqar Younis from Pakistan, he also got 150 wickets in 27 matches..

Yasir Shah became the most successful bowler of the 100-years of Test cricket history .

Earlier, Yasir Shah, Australia's fast bowler Charlie Turner had hunt 80 in his early 12 test matches at the beginning of the 19th century..

Yasir Shah got 15 wickets in 2 Test matches against Angled and got the best player in the series. Apart from this, Yasir Shah is also the Pakistan test cricket bowler who has got 50 wickets in the lowest match, he performed this show in just 9 Test matches and joined the Top 10 best bowlers of the Test cricket...
Australian Leg spinner legend Shane Warne has also declared Yasir Shah as the world's best leg spinner, while Abdul Qadir is also worth the Yasir Shah's best bowling.


The first spinner to get five wickets in the 5 test matches continuously .

Pakistani Test cricket bowler Yasir Shah became the most wicket-taker spinner during the 5 Test series due to his best participation in the test cricket .
Yasir Shah became the first spinner to get five wickets in a five-match match consecutively, after the three Test matches of the West Indies tour, he also performed this performance in Dubai and Abu Dhabi too, in addition the three fast bowlers got this achievement besides the Leg Spinner.

Overall Yasir Shah has got the 10 or more wickets two times, & 13th times in innings got 5 wickets or more.....