Dhoni out as India name squads for West Indies series

Dhoni out as India name squads for West Indies series 2019.

India will be without Mahendra Singh Dhoni for the upcoming full tour (three T20Is, three ODIs and two Tests) of the West Indies, starting from August 3. The veteran keeper had conveyed his unavailability to the board.


Star seamer Jasprit Bumrah has been rested from the ODI and T20 squads, but features in the Test party for a two-match contest.

All-rounder Hardik Pandya, who had groin injury during the World Cup, has been rested, while Vijay Shankar too is missing from the limited-overs squad as he hasn't fully recovered from the toe injury sustained during the marquee event. 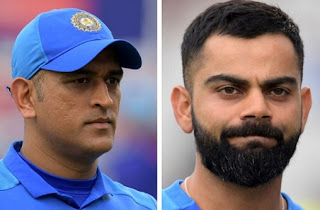 For the limited-overs leg of the tour, India have gone with a single wicketkeeping option in Rishabh Pant, while in the longer format Wriddihman Saha has been brought back following his full recovery since suffering an injury during the tour of South Africa in 2018.

India kick-off their long tour with three-match T20I series, with the first two being played in Florida on August 3 and 4, before shifting base to Guyana for the last game on August 6. The three ODIs will then follow from August 8, before the two-Test series begins from August 22.